Last week I went to the Shanghai Expo. This visit made me think and raised some questions and remarks which I have written below.

For centuries the anticipations of better life have drawn people to the stone refuge of the city: the stronghold of money, security and a change from their past. Cities have grown especially rapid in the last century and even more growth is expected in the coming one, where the United Nations expect that in 2030 60% of the world population will live in cities.

A look at how cities could be managed and keep people happy when they’re tightly packed in towers, losing their grips on their roots through globalisation is not unnecessary. It needs a dose of idealism, goals and creativity to accomplish this. This is, sort of, what the Expo in Shanghai is about; captured in their slogan ‘better city, better life‘.

Just part of a crowd

The soles of my foam flip-flops where slowly grated by the hot, dark grey asphalt underneath my feet. My eyes looked atop many, many, many heads covered with black hair. Many. The Shanghai Expo’d better not be window into the future concerning population density as the word ‘crowded’ would just not justify reality. Imagine you’re watching an act of an immensely popular band, and you’re in front! Man, that’s great! But suddenly, at the back of your mind a message comes through. Subtle at first, but you ignore it, it should not come, not now. The message perseveres and becomes annoying, it starts to consume your thoughts, while you try to enjoy the greatness of the act in front of your eyes. ‘Go Away!’ you think. But there’s no stopping to it. Thousands of people pressing your back, you turn and look at them, then you look to the corner where the toilets are. You sigh. 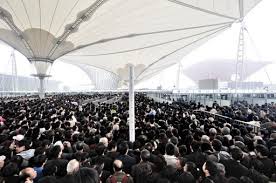 This more or less justifies the feeling of the Expo, next to the fact that the waiting time for just the Pavilion of Saudi Arabia could be up to 9 hours. Obviously, with 1.5 days to spend at the Expo, I did not decide to do that.

One thing that struck me though was the lack of thought about the waiting lines. If the expo is a showcase of countries to show what they have to offer, why not think of showcasing your visions during waiting? Why not making the waiting line part of  the experience? With spending 2 to 9 hours waiting and probably less than an hour spending in the pavilion itself, you could expose yourself much more effectively during those  hours. The Efteling, a popular theme park in The Netherlands, very effectively mixes waiting lines as part of the experience into their new attractions, making the experience of the park as a whole much better as well. Many people who’d been at the Shanghai Expo before did not feel like going back again, is that a good sign of visitor management? Therefore, I’m in favour of a ‘No-waiting policy’, where the waiting is made part of the experience.

The word of this time and expo is undoubtedly ‘sustainability’. Knowing that development with thoughts on the long-term benefits will undoubtedly be key to manage ourselves, the presentation of this theme during my visit at the Expo struck me as a bit odd. Although the creation of awareness with the Chinese society of the impacts of previous and current developments is good, the way the future was pictured in many pavilions was almost fairytale like. ‘Our sustainable futures are flying towns with pink ponies whinnying cheerfully, places where people will live in the trees and be vegetarians forever, or sub-water cities!’.

Although nothing new comes from conservative thinking it couldn’t hurt showing sustainable thoughts which are more based on reality. Sustainability is a word thrown around a lot, as well as green, which actually is just a colour. Looking around the expo it seems that countries are really involved, though while looking at reality governments are true conservatives. Always compromised by their interests in money flows and (inter)national pressure. ‘Toughtful’ long-term development is not a dream though, the awareness created will inspire and demand will rise.

One thing is sure when you’re walking through the Expo, you know that these projects cost a lot of money. Most buildings have their own special architecture and have something special (about the country it’s from) inside. Going with a group of Macanese residents we couldn’t leave the Macanese pavilion unvisited. Fortunately I was able to avoid the waiting line (hooray) by faking a Portuguese identity (who’d have known). My visit to the Macau pavilion left me thinking, for quite some time. You could say this is a good thing, though unfortunately it kept me thinking of the risky/negative side most. Although Macau is not really a country, being a special administrative region of China, the building and its interior showed it must  have cost more than a small dime. The way the (relatively small) building was dressed up (inside) was quite good. The presentation and especially the content was.. well.. it had a cheap feeling about it. While being directed through the building by 2 children and an uncle (they were projected on a continuous screen on the walls) the history of Macau was told and discussed what a great place it is. The 3 actors fet like they were working for ‘tell-sell’, trying to make me buy a fitness instrument “which works tremendously as a dust gatherer in any corner of your house! It’s magic!”. The uncle even got the words “this chicken is the best of the world!” from his robot-like smiling lips. Ok, perhaps my view was influenced as well by the American voiceover, which I was hearing through a ‘phone’. Still, people were asking why I was laughing the whole way.

Another thing, which I thought was possibly even more important, was the image they created about Macau. The video screen had the uncle and children walking through a grass landscape with about 3 (of macau’s most beautiful) skyscrapers at the back. People who’ve been to Macau in recent years know that grasslands are truely hard to come by in Macau, as it is the most densely populated city in the world. The entire city is covered in tall buildings and though there definately are some nice skyscrapers, you’d never view them from a green lawn. It’s as if they thought of what Macau should look like if they could make their dreams come true and subsequently put their dreams on the screen at the Expo. The Macanese people from my group contradicted it by stating that every country is trying to show their best at the expo. YES, they do. But show your best and manipulating the truth by creating a new one is quite a difference. In a commercial it’s your job to influence the image people have about your (in this case) destination. The image is taking shape in people’s heads and they creates expectations. The danger lies in over-expectations of the truth. When the people who have visited the expo expect to find the view pictured by the Macanese Pavilion they might end up being disillusioned and unsatisfied. Going home to their friends telling that Macau did not deliver what they though of it to be. And in marketing, bad word-of-mouth is the worst kind of marketing you could have.

At the Macau Pavilion it seemed that they’d put message over emotion. They’d rather tell you a lot  about the city than putting emphasis on what you could feel, or how the Macanese people are. In my oppinion it’s supposed to be the other way around. Views and messages which really pull the heartstrings have a bigger impact on people. I would focus on creating emotions with the viewers, rather than informing them about the best chicken in the world. IF you’re going to spend a lot of cash on something like this it’d be more important to either use good actors or use a story about real people in Macau. Of course, there’s one thing which is probably most important: the audience. One might say that the Tell-Sell way is the best way to adress the Chinese society. Unfortunately, I don’t know. I don’t think so, though.

I’ve got a bigger dick

Being a man isn’t easy. Although much easier than the lives of women, we have to compete continuously, whether or not it actually works to impress doesn’t always matter. It’s in our nature to dominate and make other men feel lower in the pecking order. In this we’re not much different from our ‘cousins’ in the ape-world. A big difference however is the size of our communities. An ape community does not stretch over more than tens or hundreds. Our society starts to stretch across the whole globe, making it more and more difficult for men to show off their size.  Fortunately for most men, they rule. Governments, mostly. Making it possible for them to shape humoungous dicks in city centres like Shanghai, or Dubai. It’s even become a game; some of them do not want to show their dicks yet, waiting for the other to show it first, as when they do they can stretch them a little longer and still be possible to be the dominant male. The winner will be admired allover, and people will come from afar to see their dicks, taking pictures of it in the process. But it’ll just be a matter of time, before some other dick will show up.